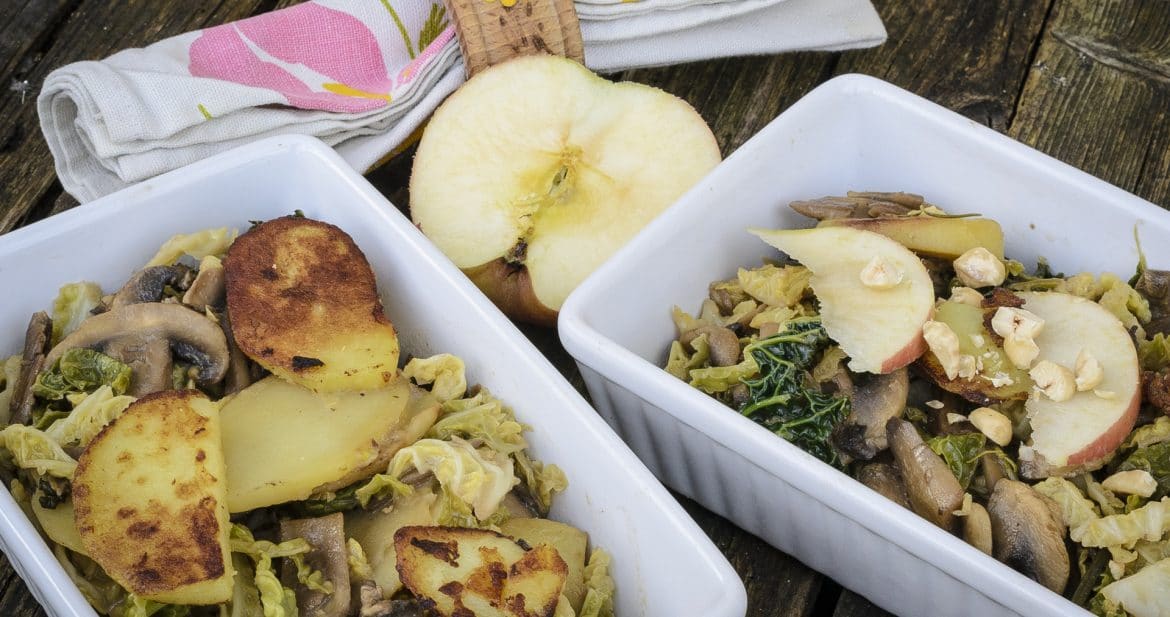 In this winter dish cabbage, potatoes and mushroom are put together by the coconut milk which substitutes the classical cream.

Cabbage and potatoes are paired in a lot of dishes typical of northern Europe, even of Milan which is in northern Italy!

The idea for this dish came from the Green Kitchen Stories‘ video below, where they cook wild mushroom with fried potatoes and cabbage:

When I saw them putting together this dish I wanted to try it badly, perhaps because of the camping idea, all the adventure behind it or simply because of the thought of all those flavours in the same dish.

A couple of Saturdays ago, after collecting Deta from her drama class, I asked her and Datti if they would help me cooking this dish.

I showed the girls the video and Deta wanted to cook it on real fire as in the video, she wanted at least to pretend we were camping!

Deta peeled and cut the potatoes, Datti the mushroom and I shredded the cabbage.

In order to give the mushroom a bit of wilderness I added some dry porcini which I had soaked in warm water.

I also replaced the heather with simple rosemary, an adding that I really appreciated.

I was doubtful about the maple syrup, as we don’t really like sweetness in savory dishes, but then Deta insisted – and at the end of the day it was supposed to be a Swedish dish so I had to keep a bit of its authenticity intact.

I also left both the apple topping and the crumbled hazelnuts
optional for the same above reasons.

To my great surprise Datti liked it more with the sweet topping even if she usually doesn’t like mixing sweet and savory.

The hubby and I enjoyed it in the “complete” version as well.

Now it is your turn to give it a try and let me know if you like it with or without topping! 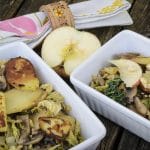 This winter dish has all it needs to comfort and surprise you with the fresh crunchiness of the apples on top of a warm cuddling plate.