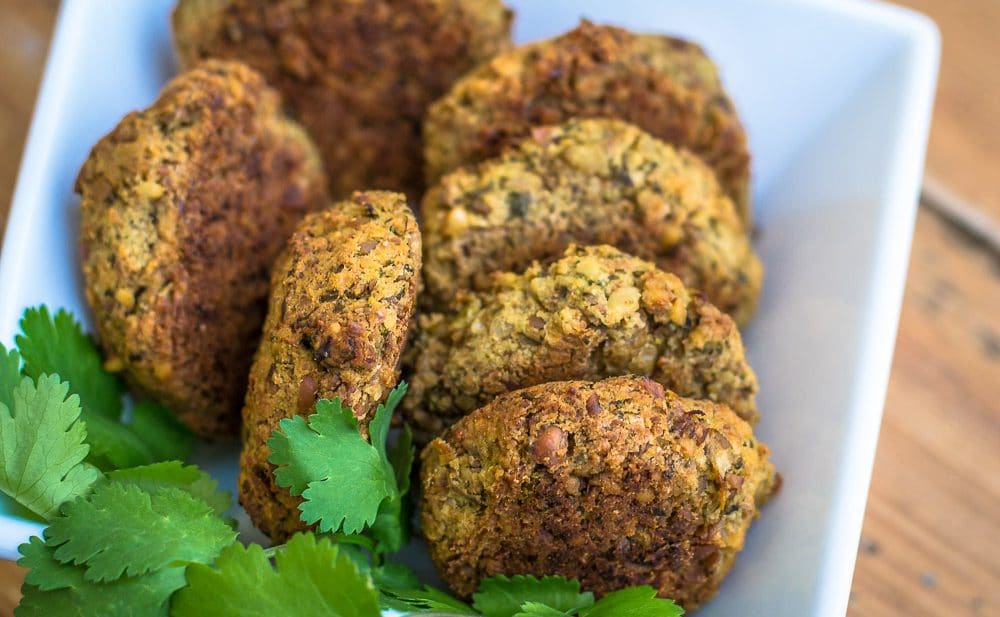 It took me time, but I eventually found my perfect falafel recipe! I now prepare them using walnuts and coriander.

Falafel. Many friends in Italy say: “Never tried them. Never heard about them”. So, I thought, I better tell them because they don’t know what they are missing!

Having such a vast food and ingredients variety and so many local culinary traditions in Italy perhaps makes it a bit harder to discover food from other countries. Unless of course you go looking for it in a specific restaurant.

Here in Ireland the different cultures are in every road you walk upon, in every school, in every market.

And indeed I tried falafel, and adored them, the first year we were in Ireland, in 2007.

It was in a farmers market. A Lebanese stall fried them at the moment and served them plain without bread or dips. Just in a paper bag.

I still remember: that day, we kept going back to that stall many times for more falafels – we were only 4 at the time but already great eaters!

That farmers’ market was in Howth, a lovely seaside town just 20 mins north from Dublin and a 30 mins drive south from where we live.

Besides the colourful village with harbour and piers, Howth also offers a beautiful lighthouse (the Baily Lighthouse) the Hubby would die to visit inside one day, and breath-taking sea views from the harbour and from the cliffs. It really is a great destination for a nice day trip. 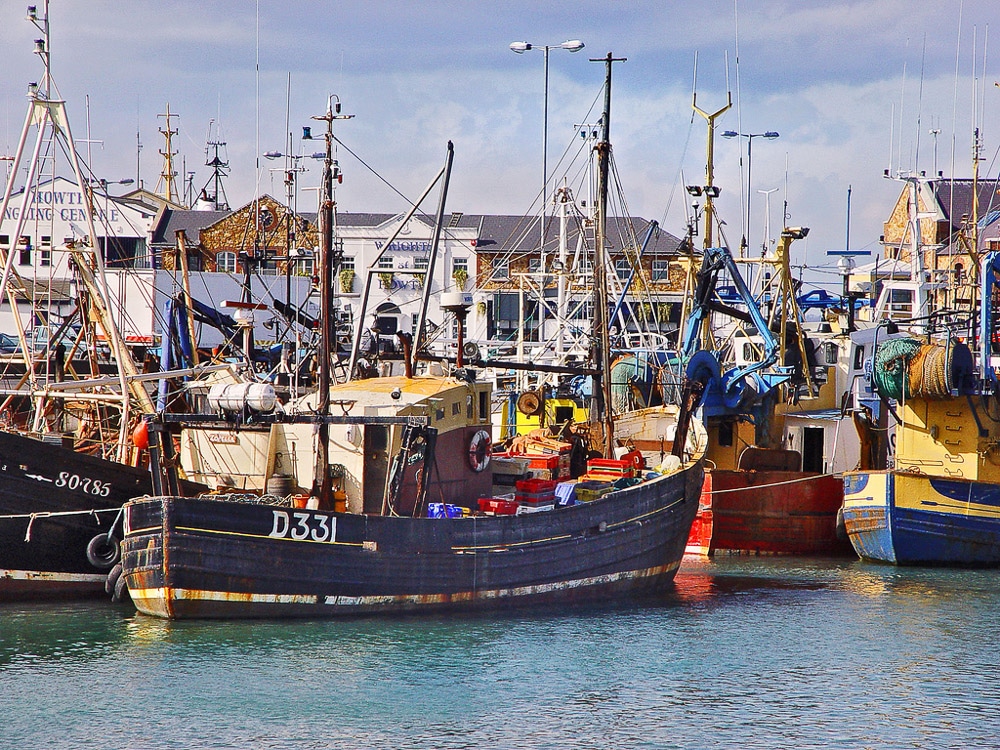 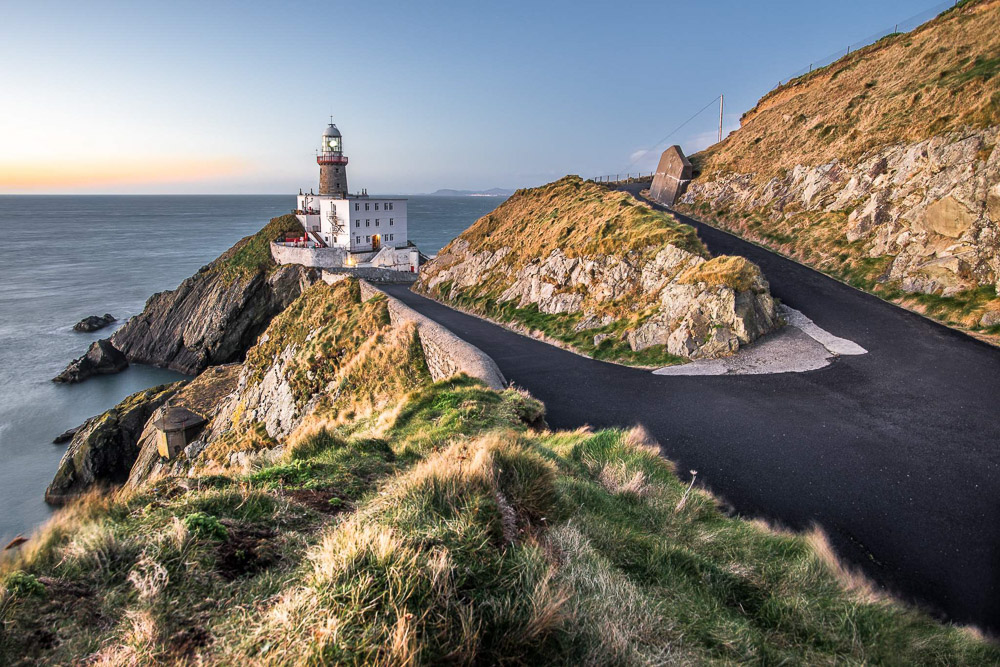 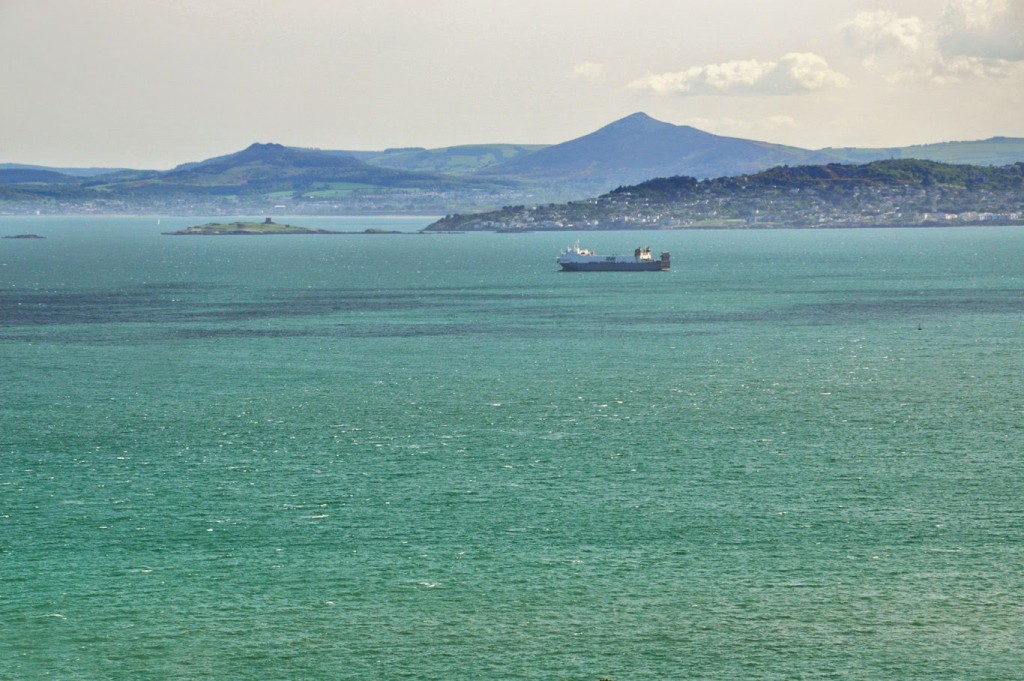 Back then, for those who know Howth, the farmers’ market was in the big parking space in front of the harbor, and it was really a big market (a few years later the Farmers Market in Howth moved to a different location and it’s now much smaller even if still worthy a visit).

I remember noticing a lot of people gathered near the boats in the harbor so we went to see what was going on, and that’s the surprise we got: 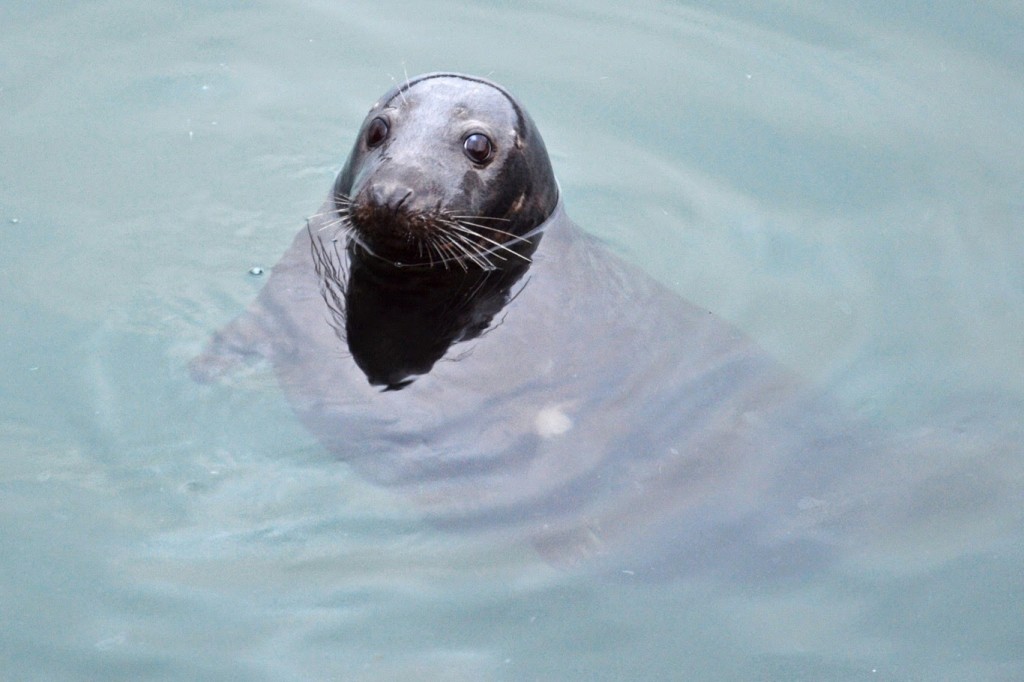 People who are used to seals probably won’t understand the level of excitement, surprise and joy that that unexpected discovery brought to us!

At a point that we bring every guest that arrives from Italy there to experience the magic (in the last couple of years we found out you can spot seals in the town of Skerries too, which is great as it’s closer to where we live and not as crowded as Howth).

Anyway, back to the Falafel…since that Howth farmers’ market, we have eaten Falafel a few times in Dublin and I have been trying different recipes to achieve the desired result.

I have also been trying to find a mixture which makes easy to create the chickpeas balls, and I eventually found that.

I love the fact that there is plenty of coriander in my falafels and I really like when I find a fennel seed and its flavor bursts into my mouth.

I chose to oven-bake the walnut and coriander falafel because oven-baking is healthier than frying and also because it simplifies the process, without the falafels losing in flavor.

Falafels are great alone or in company of pitta & hummus. I usually serve the Falafels in homemade pitta bread packed with salad, tomatoes and homemade hummus: 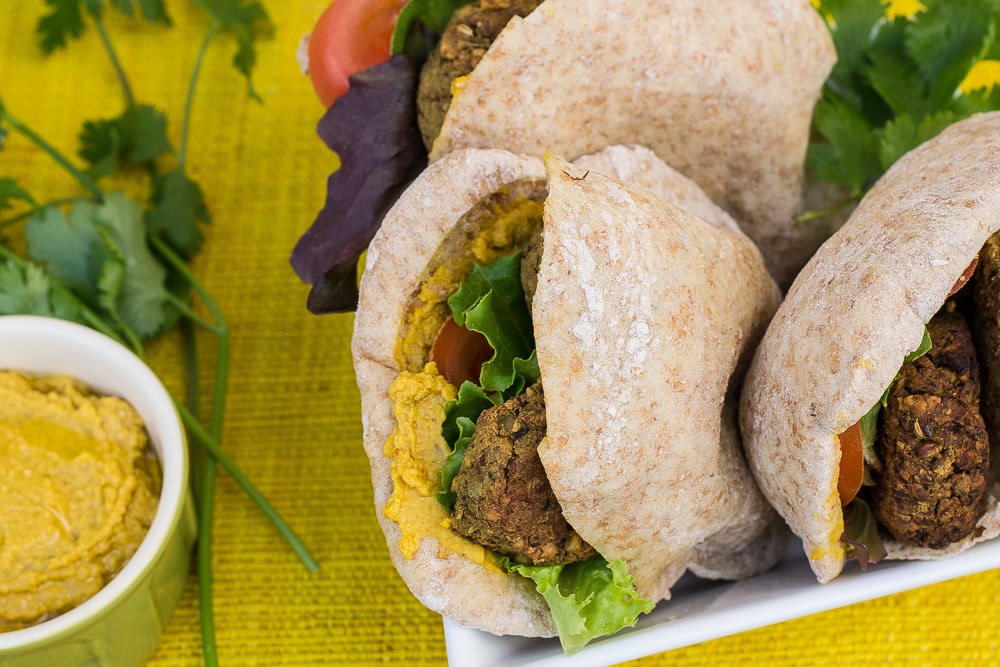 They devour the falafel, with or without pitta pockets!

How to Make Walnut and Coriander Oven Baked Falafel

I usually place all the ingredients (except for the fennel seeds that I add after) in the food processor and let it create a paste.

If you don’t have a very powerful food processor you better mince the onion garlic and coriander first.

Then mince chickpeas and walnuts.

Then mix everything together adding the rest of the ingredients.

Pour the mixture in a bowl.

Place them on a tray covered with parchment. 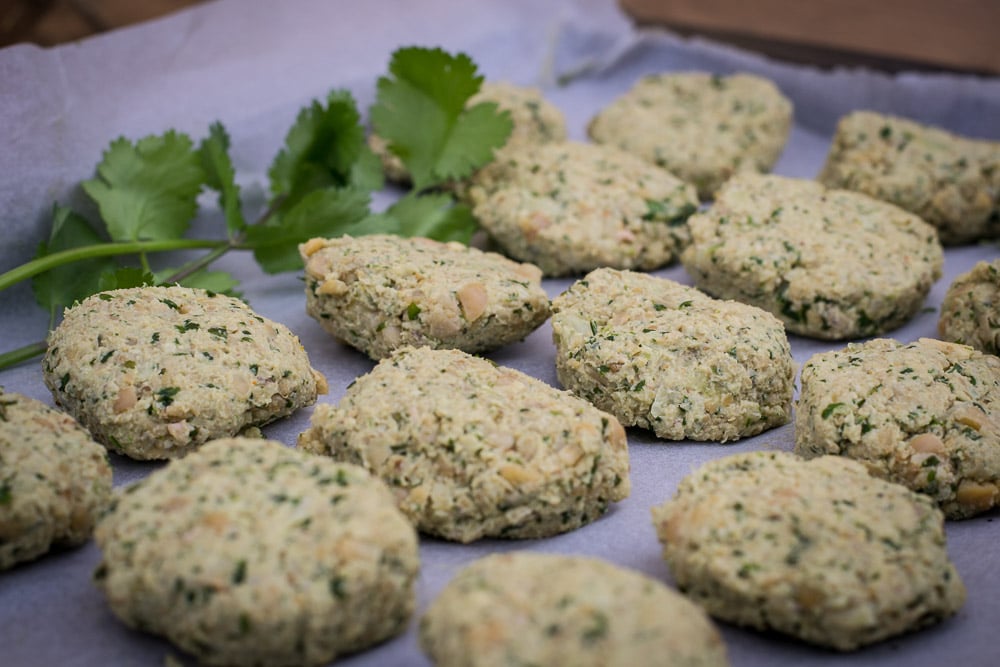 Drizzle them with a bit of oil before entering the oven…

Bake them at 200 C for 50 minutes or until they are well firm on the outside, they will still be soft on the inside. 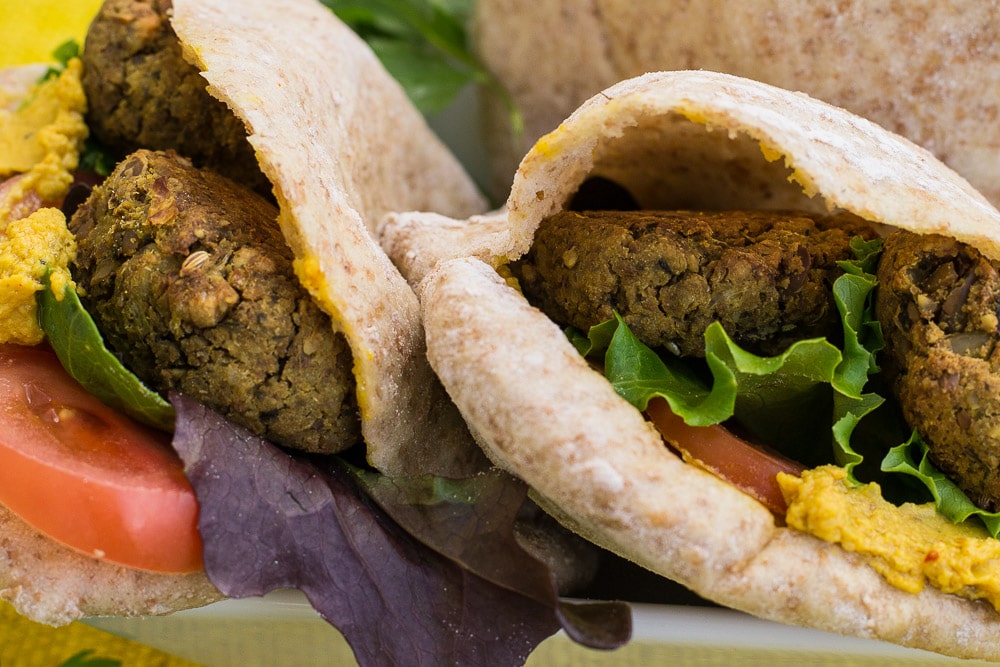