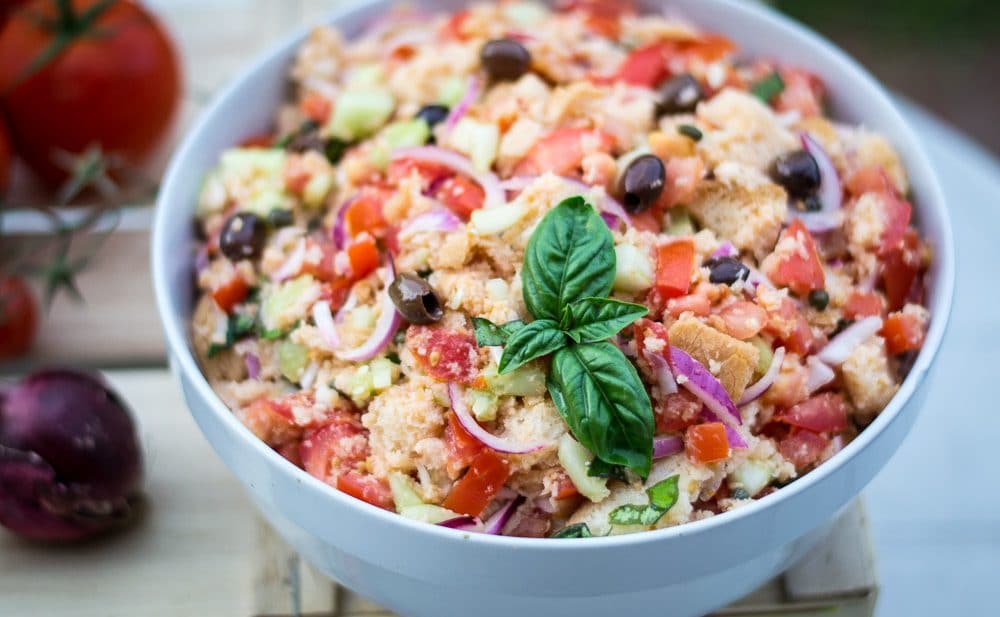 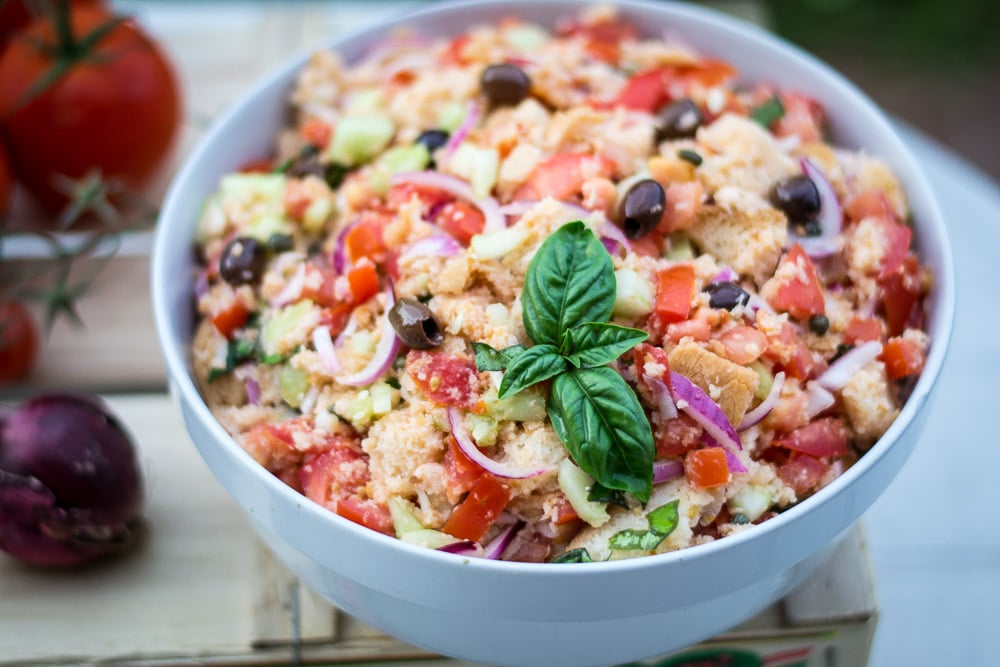 Panzanella is a Tuscan tomatoes and bread salad, a great recipe to use old bread that you wouldn’t normally use anymore because too hard and stale.

We are in Imperia on the Italian Riviera and the hot is killing but I don’t complain as this is my recharge for the Irish winter!

Anyway, even if I’m not complaining I can feel the heat roaring day and night. So, it goes without saying that I’m trying to reduce all the cooking at the minimum.

The Panzanella or tomatoes and bread salad is a recipe that I always prepare in the summer: it does not require cooking, it’s relatively quick to make and it’s really tasty and refreshing. 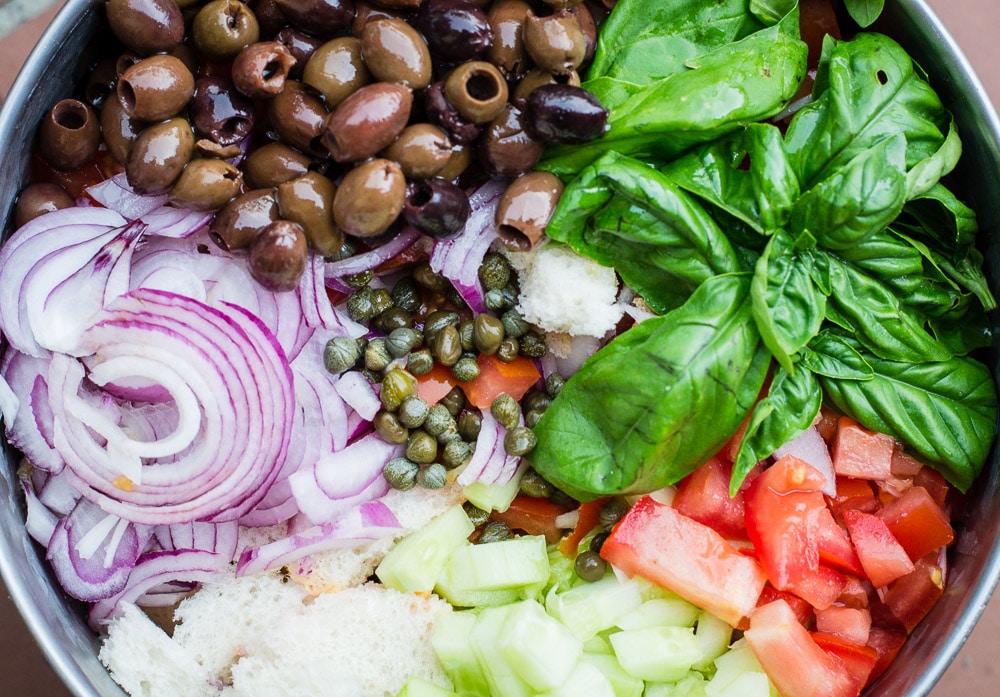 It is a Tuscan recipe that an ex colleague taught me when I was still working in Italy.

It is a peasant dish born of necessity and, as it happens with most of the traditional and regional Italian dishes, there are endless versions of it.

The most important ingredient tough is the bread, it must be good country bread, a rustic loaf that is getting stale. Do not use sliced bread!

I usually prepare the Panzanella in the afternoon after a little nap and then I put it in the fridge. Like that my dinner is ready!

Yesterday we brought it for a picnic on the beach.

We arrived on the sand at 6 pm when people were starting to leave and we enjoyed the low sun, the gradually empty beach, the sea all for ourselves.

It is a rare pleasure to be there at that time, the atmosphere is unique.

Sometimes the wind is a bit chilly when the sun goes down, but this year there is not such a thing (so far) and eating on the beach at 8 o clock or later is a real treat.

Ingredients for the Panzanella (Tuscan Tomatoes and Bread Salad)

First of all, I must say that the doses in the Panzanella or bread salad recipe don’t really matter. Add as much as you like.

How to Prepare Panzanella (Tuscan Tomatoes and Bread Salad)

Cut the bread in big chunks and place it  in a large bowl.

Pour some water and vinegar on top of the bread.

Chop the tomatoes and add them to the bread.

Slice the onion, cut the cucumber in little dices and add them to the bread.

Add the stoned olives and the washed capers.

Tear the basil leaves with your hands into pieces.

Dress with olive oil and salt. 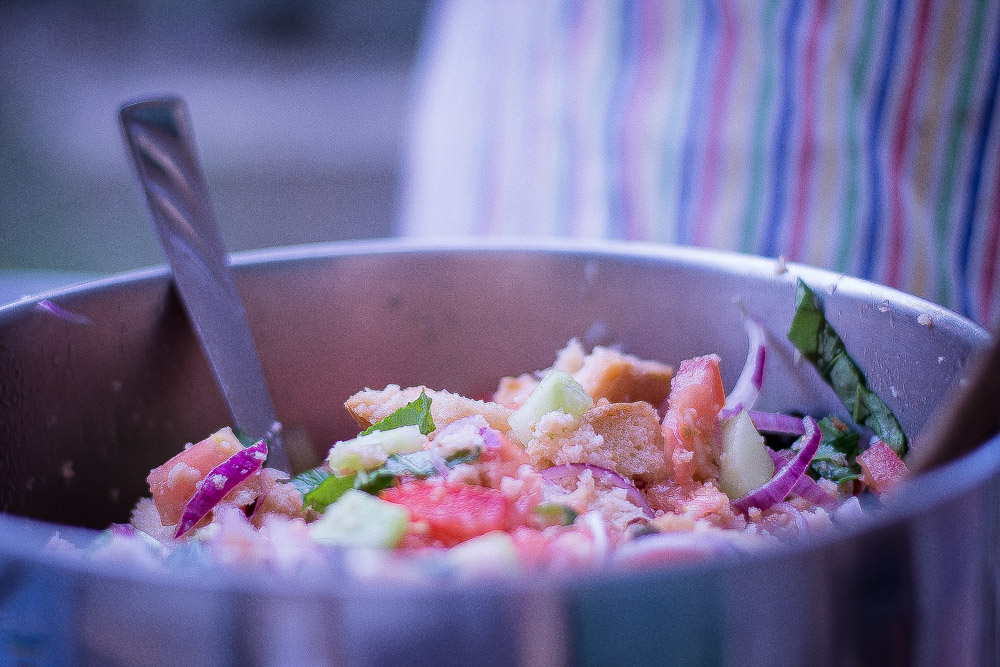 Cover the bowl and place it in the fridge.

Enjoy after at least 1 hour. 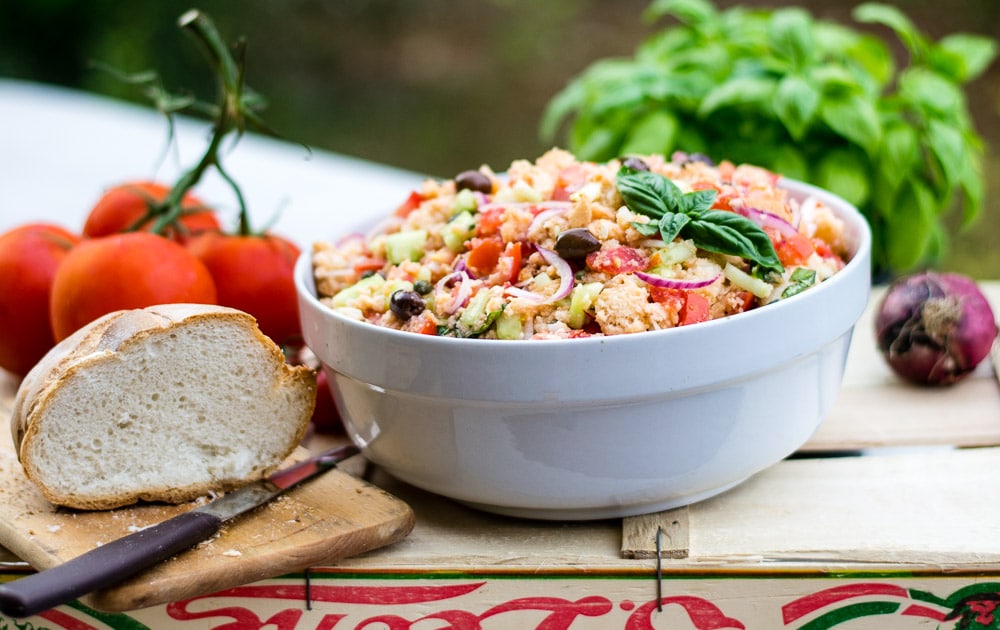