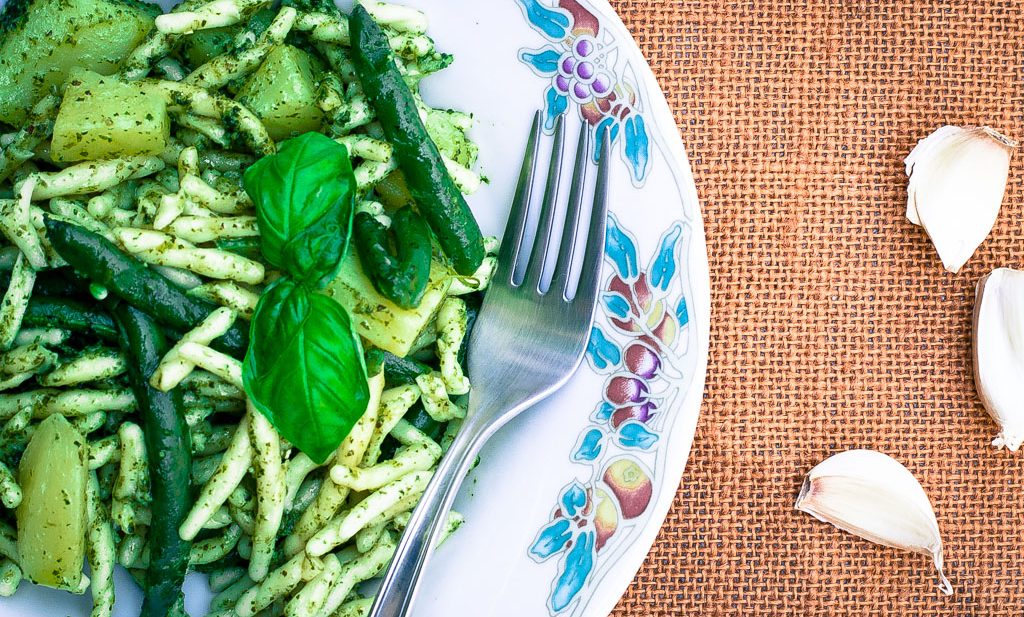 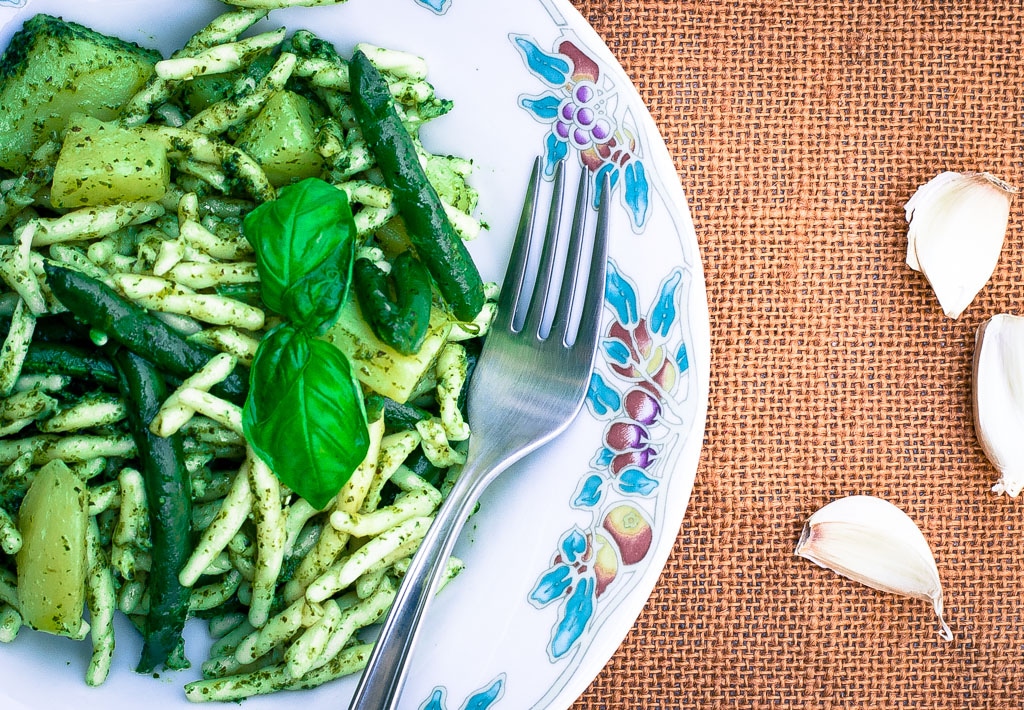 Trofie al Pesto Genovese, a simple classic Italian pasta, deserves a place in my blog since we are now in Liguria, pesto’s birthplace.

We have been at the seaside for a week! We are in Imperia, on the Italian Riviera, where we usually spend our summers.

Imperia is a town in Liguria, region in north-western Italy, bordering with France and French Riviera, and the place where the torta verde and the Pesto were born.

Pesto Genovese (which means Genoese Pesto – Genova being the main city in Liguria) is indeed officially recognized as Prodotto Agroalimentare Tipico Ligure by the Italian Ministry of Agricultural, Food and Forestry Policies.

This label is assigned to Italian regional food products officially recognized as traditional, and it’s similar to the Protected Geographical Status of the European Union.

The first mention for pesto as it is known today is from the book La Cuciniera Genovese written in 1863 by Giovanni Battista Ratto, but the Pesto Genovese has ancient roots.

Its oldest ancestor is likely to be a Roman green paste, described by Virgil, called moretum and made of crushed cheese, garlic and herbs.

During Middle Age, and more specifically starting from the 13th century, when Genoa was a wealthy maritime republic, in Liguria the moretum became a sauce made of crushed walnuts and garlic (mainly garlic) called agliata, extremely popular on the Genoese galleys.

The agliata was in fact used by the seafarers as natural medicine to fight scurvy during the long voyages at sea.

This paste became also known as u pestu, which means crushed in Ligurian dialect, as its ingredients were crushed in mortars.

Basil, the main ingredient of the Pesto Genovese as it is known today, was only added to this paste in the 19th century.

If you want to know more, this is a great reading on the fascinating evolution of Pesto Genoese.

So basil pesto is my favorite pesto.

I usually prepare pasta al pesto adding potatoes and green beans, as I find they really add texture and personality to the dish. As basil, they are a relatively recent addition to the recipe, as they were added only in the 19th century.

Ingredients for Trofie al Pesto With Potatoes and Green Beans

In my attempt to reduce the dairy in our diet, I omitted the Pecorino and reduced the Parmisan. So this is what I would suggest to prepare 220-230 gr of Pesto (for 500 gr of pasta, serving 5-6):

If you are a purist you can find the list of the specific ingredients for pesto on the Consorzio Pesto Genovese website, the consortium aiming at safeguarding the traditional recipe for pesto.

As I am trying to describe you the classical pasta with pesto, I’ll spend a few words about the type of pasta I usually use for pesto: trofie.

Trofie is a short, thin, twisted pasta typical of Genova, shaped by rolling a small piece of dough on a flat surface to form a short, round length of pasta with tapered ends, then twisting it to form the final shape.

Of course here in Italy you can find both fresh and dried trofie ready to cook in the supermarkets.

How to make Trofie al Pesto With Potatoes and Green Beans

The original preparation of pesto would require a manual crushing through a mortar and pestle, but you can also use a food processor as I usually do or a stick blender.

If you want to use the mortar, start by pounding the garlic and salt in the mortar with wooden pestle.

Once you get a smooth paste, add the basil and keep grinding using a circular motion. Don’t be too rough, to preserve the essential oils in the basil.

Now add the pine kernel and grind some more, then the cheese. Mix well and add the oil, keeping mixing.

If you want to use a food processor or a blender, you can just place all the ingredients for the pesto in it and pulse until creamy.

Tip: to minimize the oxidation of the basil, refrigerate the blades before using them.

Also, try to process the pesto as quickly as possible, otherwise the pesto will oxidize turning color and going brown. 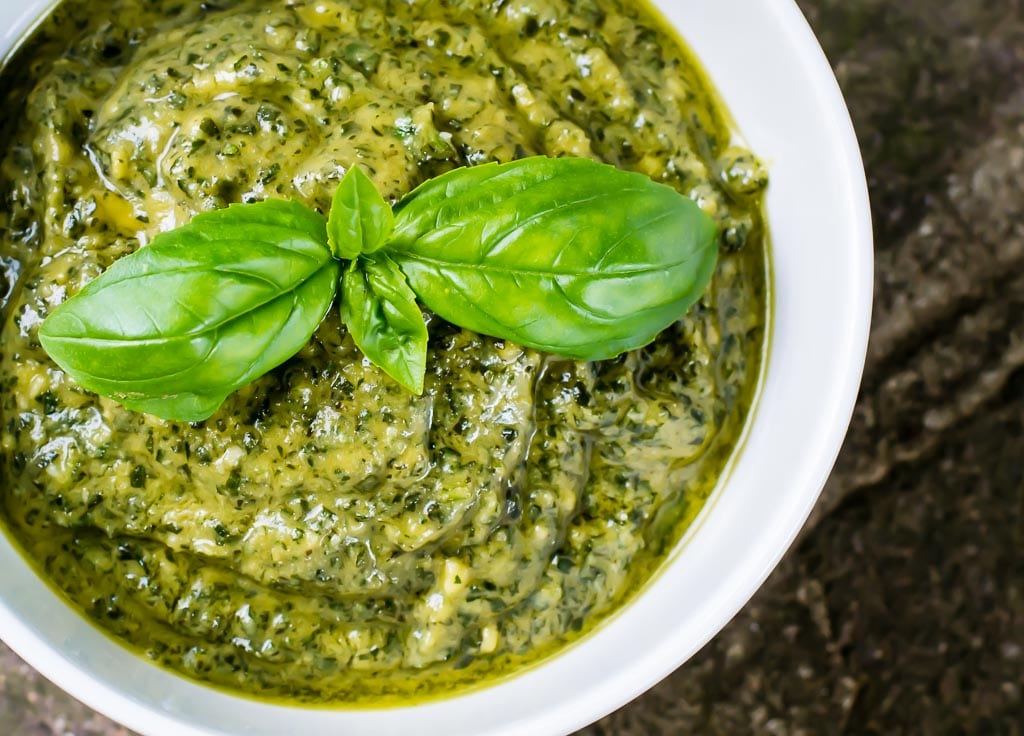 Once ready, set aside, possibly in the fridge.

Put a big pot of water to boil with the potatoes diced inside.

When the water boils add salt, washed and trimmed green beans and trofie.

Stir for half a minute until the water reach its boiling point again.

Let it cook for the minutes indicated in the pasta package or taste it from time to time.

Drain the pasta, potatoes and green beans but keep a bit of the cooking water (you may need it to add fluidity to your pesto).

Coat it with the basil pesto and enjoy! 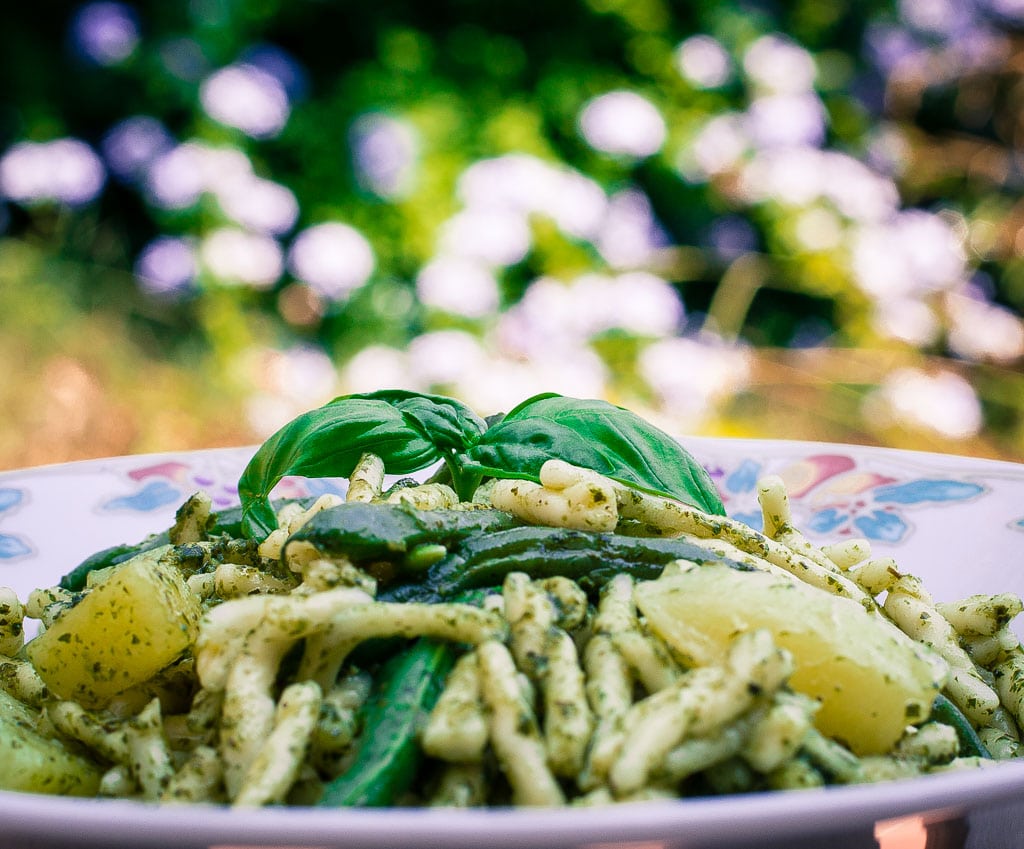